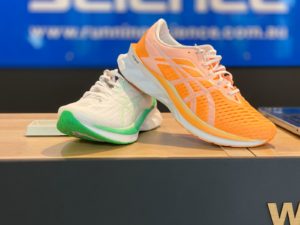 If you’ve been into Running Science in the last few days, you might have noticed the staff sporting some fairly distinct orange shoes. These are the ASICS NOVABLAST, a brand-new model from the Japanese footwear stalwarts. A departure from ASICS’ usual fare, the NOVABLAST can be classified as a ‘maximalist-lite’ shoe. It uses the company’s FlyteFoam Blast compound in the midsole for a soft, lively ride that doesn’t weigh the shoe down. It feels almost like a cross between New Balance’s two most prevalent compounds – that happen to appear in two of our most popular shoes; it has the responsiveness of Fuel Cell (found in the NB Rebel) and the pillowy forgiveness of the new FreshFoam X (in the 1080v10). This softness means the NOVABLAST is definitely a neutral shoe; it offers some stability because of the width of the platform, but a Brooks Adrenaline this is not. That being said, you’re basically getting the softness of a heavy shoe in a model that has best-in-class weight.

While the midsole may attract the most attention, the upper on the NOVABLAST deserves a mention. It’s made of a lightweight, traditional mesh. While it’s not silky soft, it’s nice and flexible, a quality that lends it a very comfortable feel. This is definitely a shoe you need to try on in-store, as ASICS have gone for a fairly roomy fit that’s relatively wide around the toe-box. It’s not quite a 2E (extra wide), but it’s somewhere along the lines of an ON Cloudstratus.

Since we’ve had the NOVABLAST in stock, they’ve wowed a few customers with the springy ride and generous fit. If you’d like to give them a go, book a free ShoeFIT appointment on our website and get your feet in a pair!