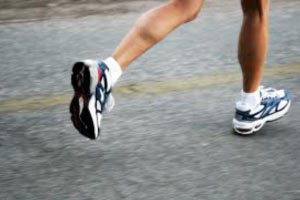 According to a study published in the International Journal of Sports Physiology and Performance, 93% of runners at the 2011 Milwaukee Lakefront Marathon were heel strikers. There were almost 2,000 runners observed and the researchers found that faster runners were less likely to heel strike. The study also showed there was no difference in whether one gender was more likely to heel strike than the other.

Interestingly, by the 30km mark, 96% of runners were heel striking. Some of those who had been midfoot or forefoot striking earlier in the race had switched to heel striking by 30 kilometres, presumably as they tired, and perhaps started to slow down and lose correct running form.